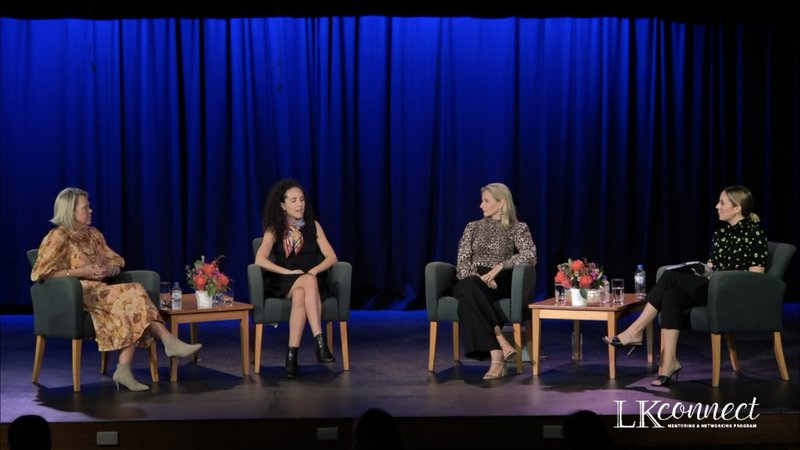 In a truly inspiring LK Connect event on the future of content and communication, an outstanding panel of ex-students from Ogilvy Australia, Seven West Media, Google Australia and 89 Degrees East gave a global perspective on advertising, communications and the ever-changing digital media landscape.

The women provided fascinating insights into the worlds of advertising, television and digital media and a wealth of advice on the different ways they sought out and discovered their passions in their early careers. They also shared an insiders’ perspective on the significant changes the last two years have wrought in the workplace and the strategies they are implementing to future-proof their organisations. Building resilience, overcoming adversity and fostering wellbeing were also discussed.

The panellists also reflected on the critical role their time as Loreto Kirribilli students played in inspiring their passions and shaping their futures. According to Camilla Ibrahim, “Finding my passion … actually started right here at Loreto and, funnily enough, right here on this stage! ... This is where I really fostered that love of language, of verbal communication and storytelling.”

2022 Vice-Captain Olivia summed up the feeling of the audience when she thanked the panellists, declaring, “You are such distinguished women with such amazing careers. Thank you for sharing your experiences… I’m so excited to go into a workforce where there are women like you who are paving the way for us!”

Thank you to our LK Connect Communications Industry panellists:

Jessica is a communication expert with more than ten years’ experience as a radio and television reporter and producer, now working in corporate communications. Her career in the media began as a producer at 2GB, before switching to television to pursue her childhood dream of becoming a reporter. She spent five years at Channel 9’s Today Show, both in front of and behind the camera, before moving to the Seven Network where she worked as a reporter on Sunrise and in the newsroom.

Jessica now works with a corporate communications agency where she uses her knowledge of the industry and her ability to tell stories to advise companies such as Arnott’s and Virgin Airlines on how to manage their brand, communicate messages to key stakeholders and achieve positive media coverage.

Sally is the CEO of Ogilvy Australia. In her 20+ years in the Ogilvy network, Sally has led teams in both Australia and New York across direct marketing and CRM, digital, public relations and advertising, making her one of our industry’s most well-rounded leaders. After managing OgilvyOne in Sydney, Sally became a Joint MD of Ogilvy Sydney before her promotion to CEO of Ogilvy Australia in 2021.

Beyond her proven track record leading successful client engagements, Sally’s achievements also include improving the wider advertising industry, from developing junior talent through Ogilvy’s Goliath Graduate program, to holding agencies accountable on diversity and inclusion through initiatives such as Changing the Face.

Katie joined Seven West Media as Chief People and Culture Officer in June 2017 from ASX – listed Enero Group where she was Global Human Resources Director. She led the transformation and turnaround of the group to create one of Australia’s most successful media services companies.

Katie is passionate about diversity in all its forms, gender equality and women progressing in society generally.

She is the published author of Deadly Earth and an advisor to the Government to eradicate domestic violence and sexual assault in Australia.

Camilla is Communications and Public Affairs Manager at Google Australia, and has been with Google for almost five years. In her current role, she looks after media relations and storytelling for a range of products, including Google Search, Maps, devices, artificial intelligence and Google’s philanthropic arm, Google.org.

Camilla has over a dozen years of international experience in communications. Before joining Google, Camilla held roles at Edelman Digital in New York, a tech start-up in San Francisco, and Unilever in Sydney. Camilla holds a Bachelor of Arts in Media and Communications from the University of Sydney, and a Masters of Science in Management, Information Systems and Innovation from the London School of Economics.