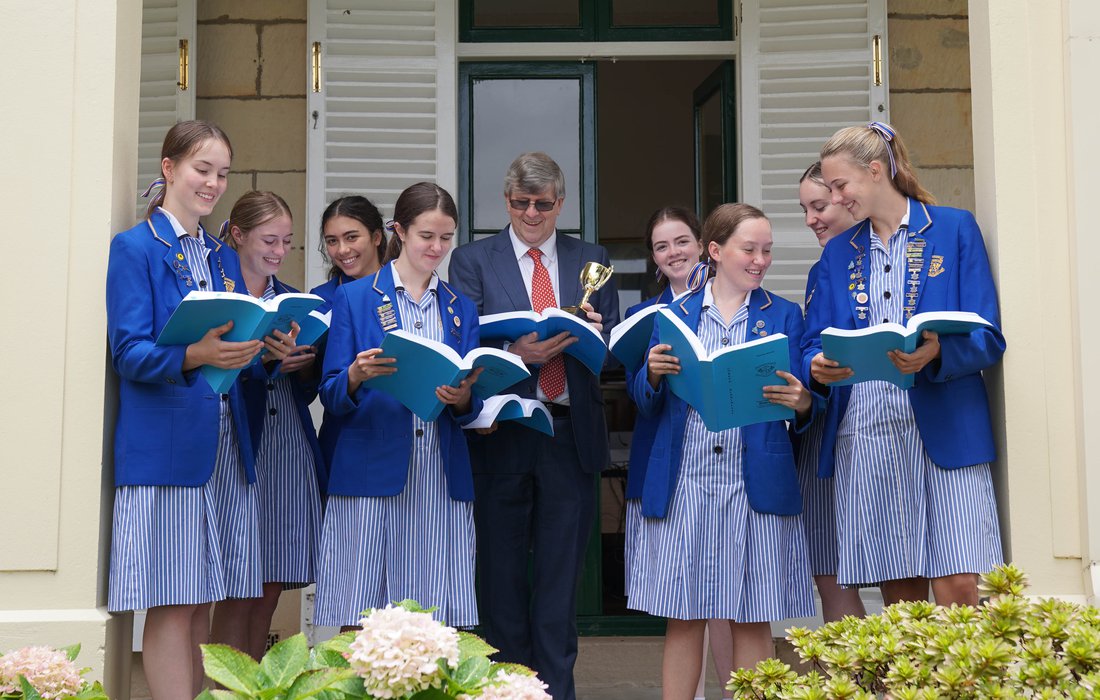 The art of public speaking is an integral part of everyday life at Loreto Kirribilli.

Oratory, the art of speaking in public, is an essential skill in today's world and an integral part of our students' everyday life at Loreto Kirribilli. From presenting oral assessments, to speaking at school assemblies, or leading smaller groups within the school, students are encouraged to develop confidence and eloquence in front of an audience.

We want our students to take their place as active, global citizens, and to speak out against injustice.

The public speaking opportunities at Loreto Kirribilli help our girls to develop effective communication skills, so that they can with courage and confidence follow Mary Ward's example of Verity, 'to do what we have to do well'. 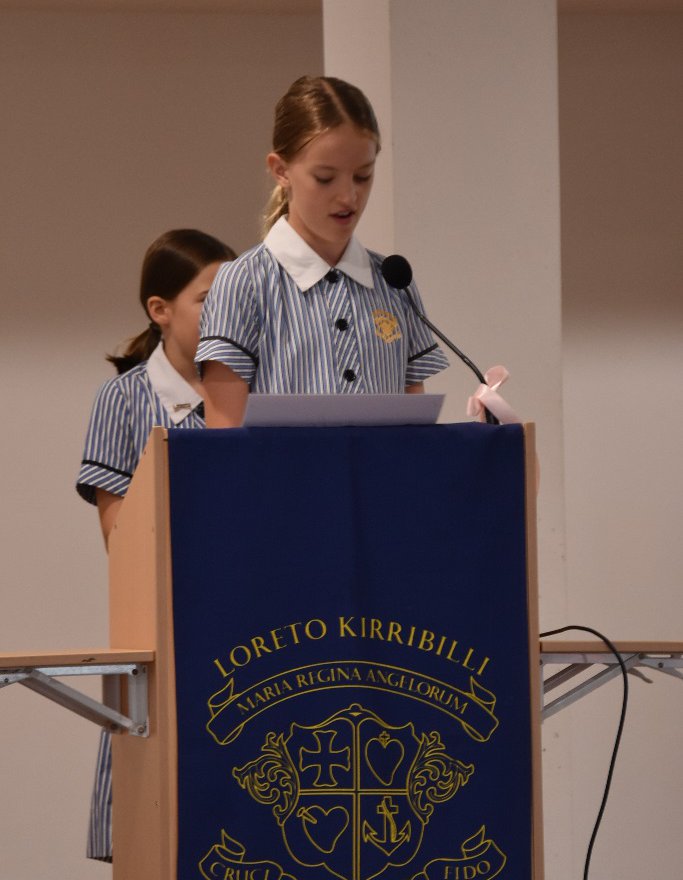 Private tuition in Speech and Drama is a public speaking program designed to equip students with lifelong skills in oral communication.

A yearly assessment is offered by the Australian Speech Communication Association (ASCA). At each level students are given the choice to present a talk on a topic of their interest using visual aids, perform extracts from prose, poetry and drama and perform fluent and expressive readings. 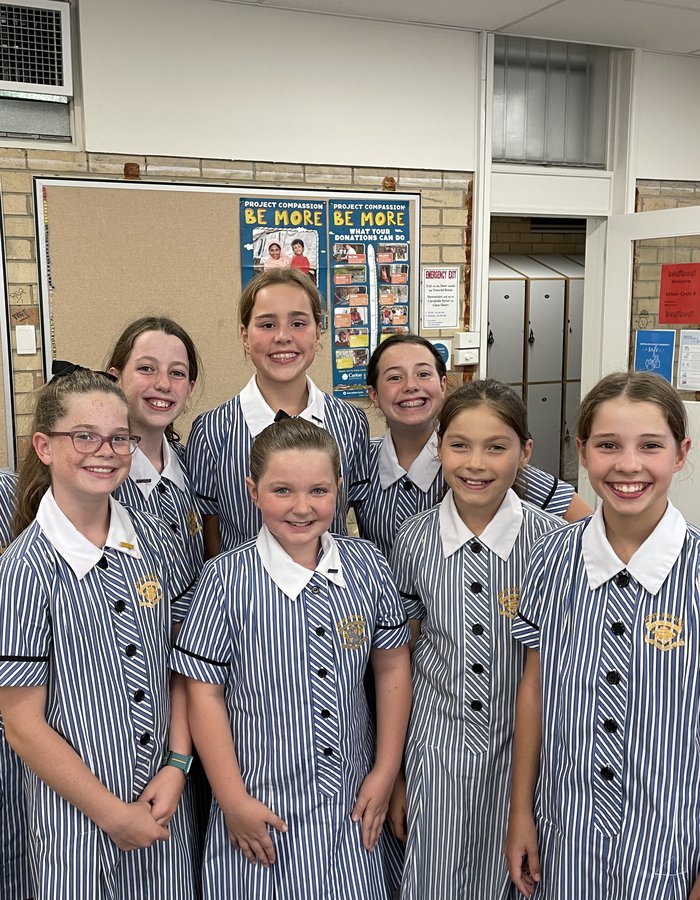 With a clear understanding of the benefits of practising logic and reasoned argument, our Year 6 students eagerly embrace the opportunity to begin their debating journey. There are two competitions held in the school year.

The ISDA Debating team is an inter-school competitive team. This competition is open to all Students in Year 6 and places on the team are earnt through trials. Training sessions with a debating coach are held weekly before school and the competitive events are held on Friday evenings.

IPSHA Debating is an integrated learning experience as part of the English program of speaking and listening. Stage 3 students are selected to participate in this competition against local independent schools. Competitive events are held during school hours. 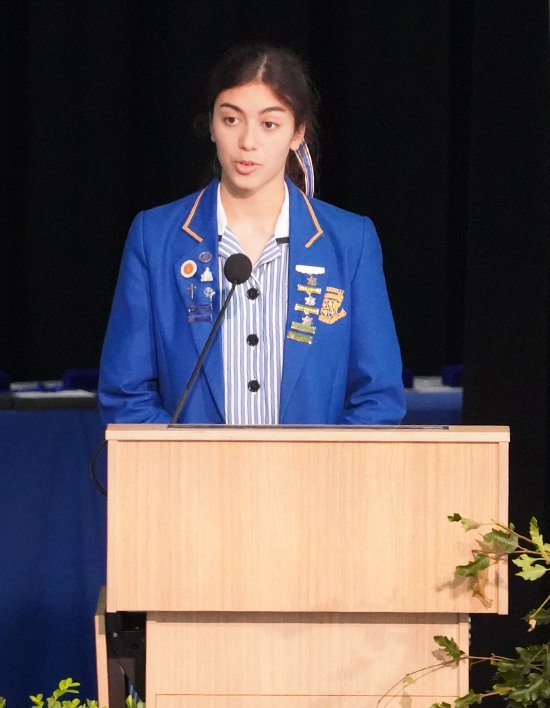 This program is designed to equip your daughter with a practical toolkit of oral communication skills that include: talking and persuading on current topics; leading meaningful discussions; maintaining audience attention; articulating responses to questions; creative techniques to optimise delivery; improvisation; impromptu speaking; conviction in delivery; voice projection; and articulation.

Speech and Drama is a fantastic opportunity for students to build their communication skills, particularly because the ASCA syllabus taught at Loreto Kirribilli places much importance on real life public speaking situations.

Competitive, controversial, always entertaining: nothing makes the school community sit up and listen quite like a Loreto Kirribilli debate. Around twenty teams compete in the interschool competitions throughout the year, with the Interhouse Debating Challenge rounding off the year.

Debating is not only fun–it is also a valuable activity for students of all skill levels, teaching critical thinking skills, social skills and collaboration, poise and self confidence, and respect for the opinions of others.

Debating is also about logic, and sustained logic at that. You've got to have the nerve to point out when someone is wrong and go further as to show why you're right. It's easy to get frustrated and let emotions override logic, however, debating will never reward you for that. It rewards your daring and your courage to challenge. Easily, this would be what I've learnt from debating and its prevalence in my everyday life only cements its importance. 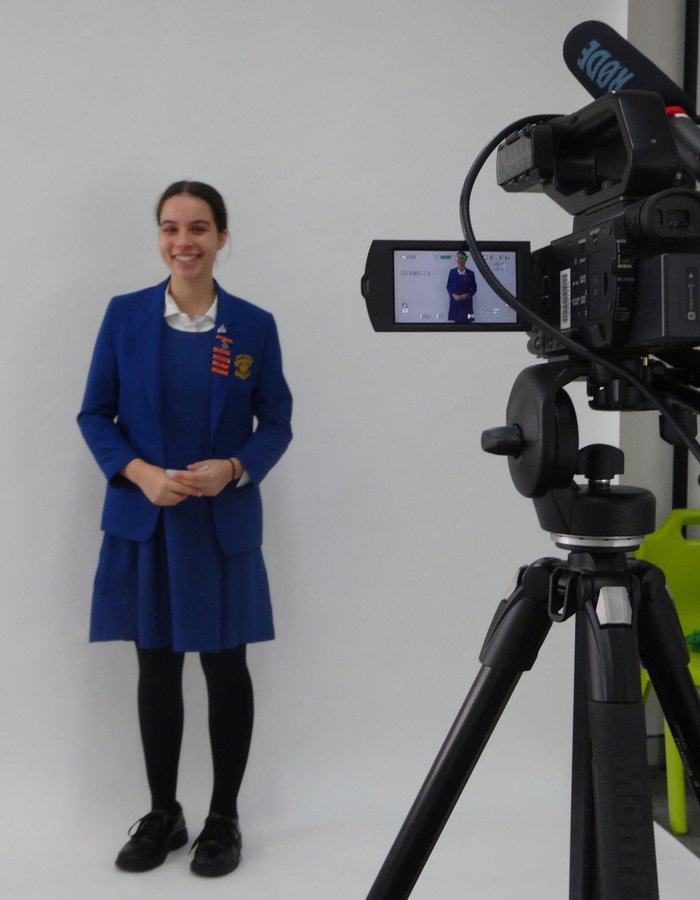 Public speaking opportunities in the Senior School are wide and varied, with participation in numerous competitions and festivals giving students the chance to hone their skills in confident, persuasive presentation.

Students can not only nurture and build their oral communication skills, they will find that public speaking helps to develop critical thinking, extend leadership skills and build teamwork. Students are encouraged to find the power of the spoken word so that they may become confident and compassionate women who will go on to make a positive difference in our society.

Ultimately, public speaking creates confidence–confidence that one gains after getting up and presenting a speech for the first time to the best of one's ability, and confidence that can only grow as you continue to practise public speaking. This improved confidence allows for students to feel more comfortable speaking at assemblies or giving speeches for class assessments. Public speaking improves students' essay writing skills... and the impromptu speaking section of these competitions gives students the chance to think quickly on their feet while under pressure, which is a skill that can be transferred to all academic subjects. 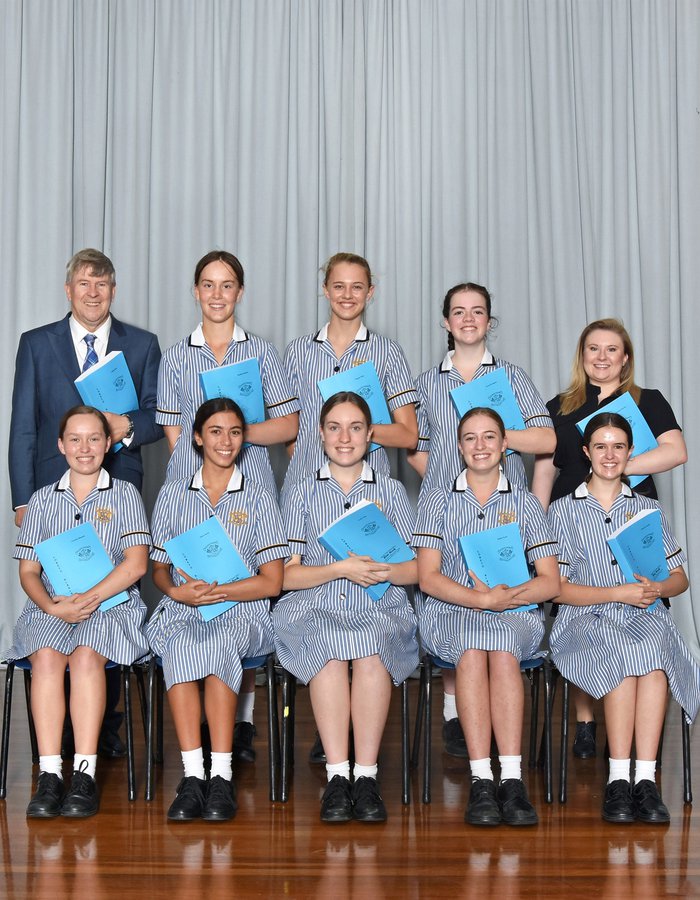 The Inter-school Mock Trial Competition is conducted by the Law Society of New South Wales, with about 300 schools throughout the State participating. In a Mock Trial, a team of students competes against another school in a courtroom style setting with the students taking on the roles of lawyers and witnesses.

It involves the lawyers asking questions of their own and the other school’s witnesses. The lawyers will also be called upon to justify why their evidence is admissible, explain how they interpret the law to support their case, and finally argue why their client should win the case.

One of the unique features of a Mock Trial is the ability of one lawyer to interrupt the opposing lawyer when they are questioning a witness, by raising an objection to the admissibility of the evidence or the question being asked. An objection has to be settled by a ruling from the Magistrate before questioning can resume.

The team assumes the role of either Prosecution/Plaintiff or Defence in cases, which they argue before a professional lawyer acting as a Magistrate. The criminal cases have involved charges of dangerous driving, theft, possession of drugs and assault, while the civil cases include negligence and contract disputes.

The students, with the guidance of their teachers, spend three weeks preparing for each case, with the actual Mock Trial lasting approximately two and a half to three hours. The students receive some coaching from a lawyer appointed by the Law Society.

The competition is organised on the basis of four preliminary rounds with the 64 top scoring teams going into a knockout. There are ten rounds in the competition with the Grand Final usually in the first week of December.

In 2021, our talented Mock Trial team were Grand Final Champions, and were also awarded the coveted Student Advocacy Prize. Loreto Kirribilli has now won the prestigious competition for 2 of the last 3 years - an outstanding achievement! 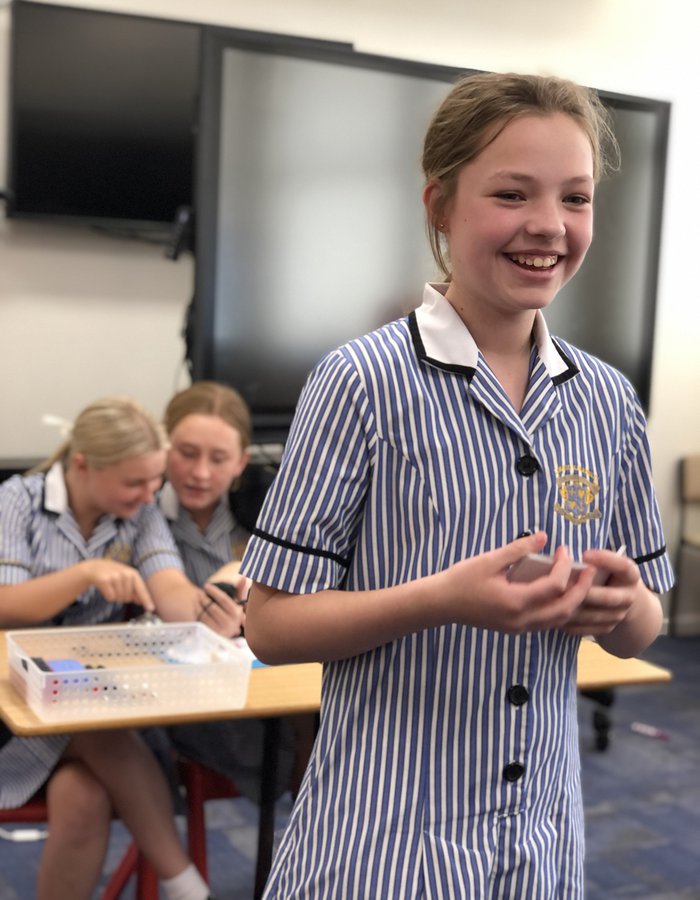 Talkology Club is a ‘drop-in’ public speaking club open to all students in Years 7–11.

It is run by the four Public Speaking Leaders. The Leaders run games and exercises on a range of areas, for example impromptu speaking, performance anxiety, the power of pause and how to build rapport with an audience. 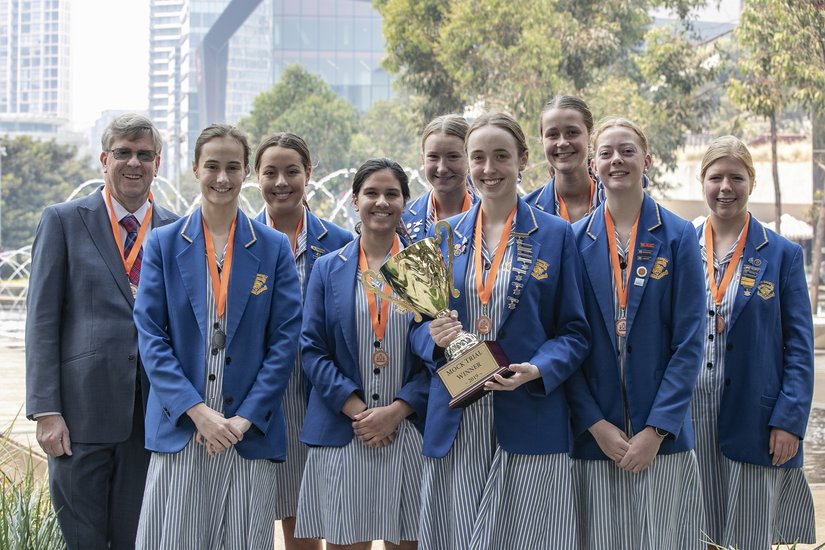 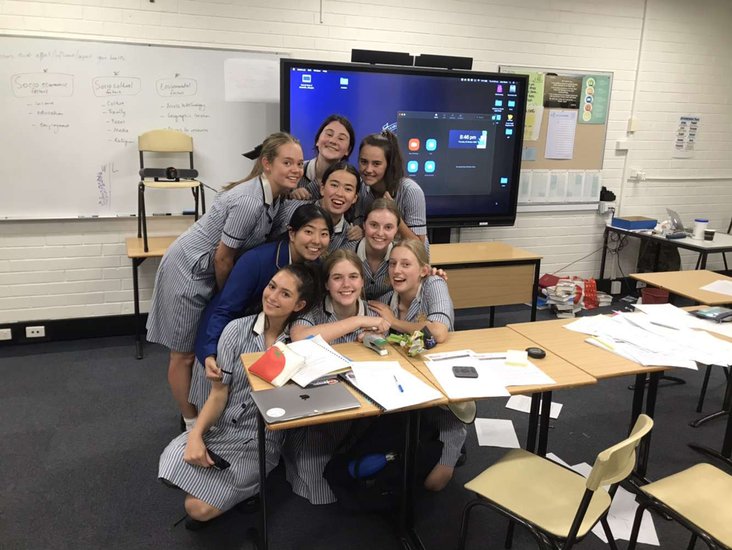 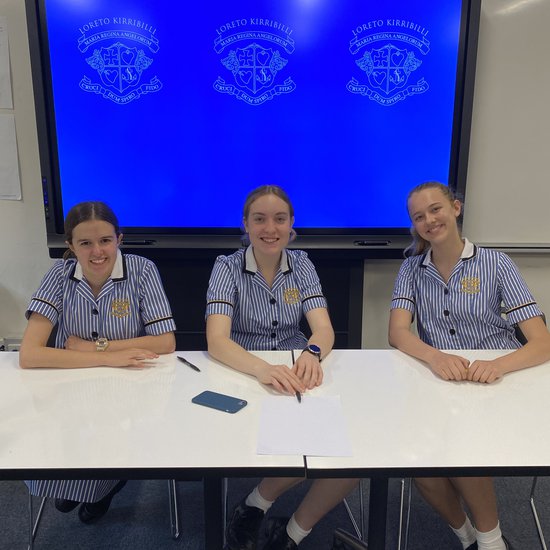 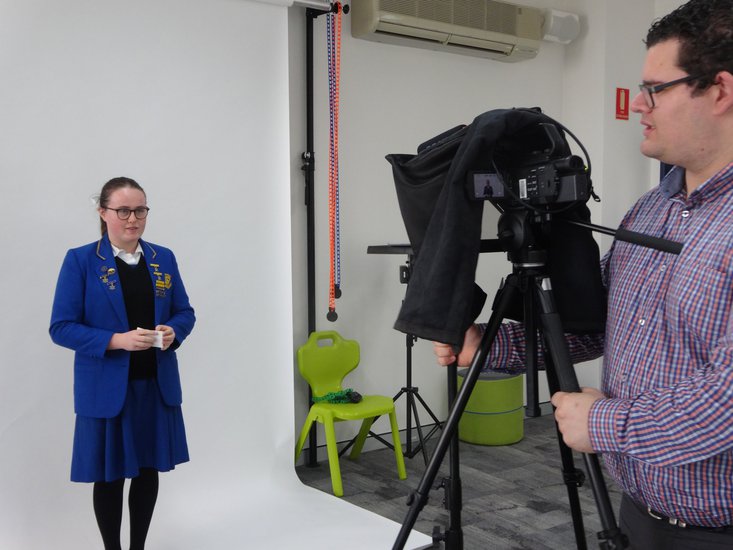 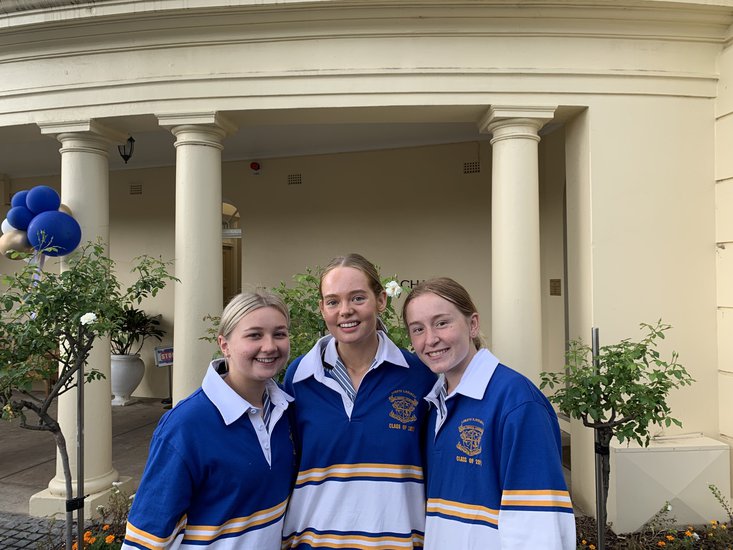 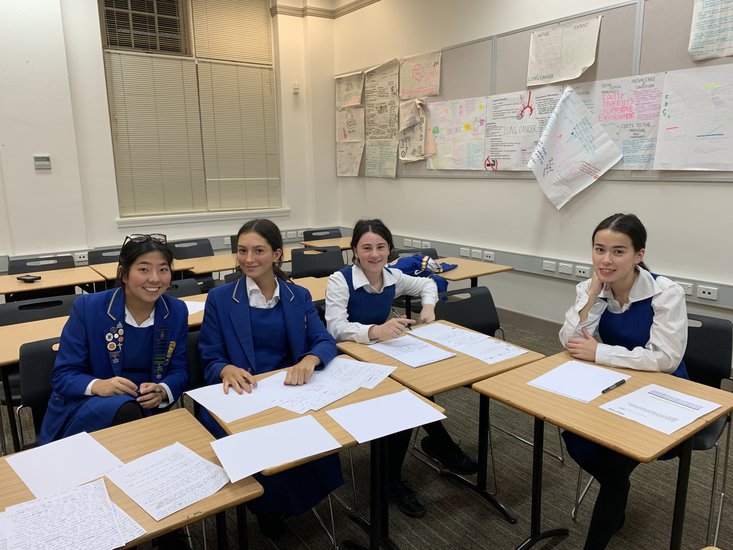 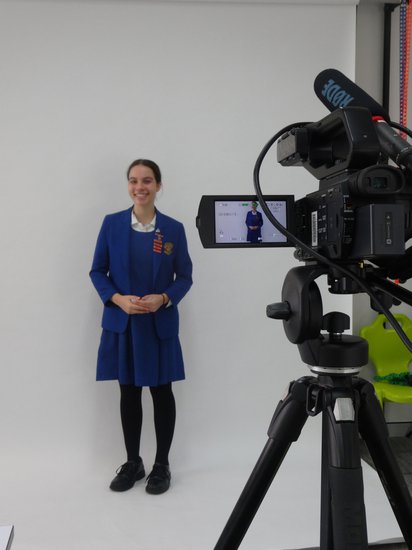 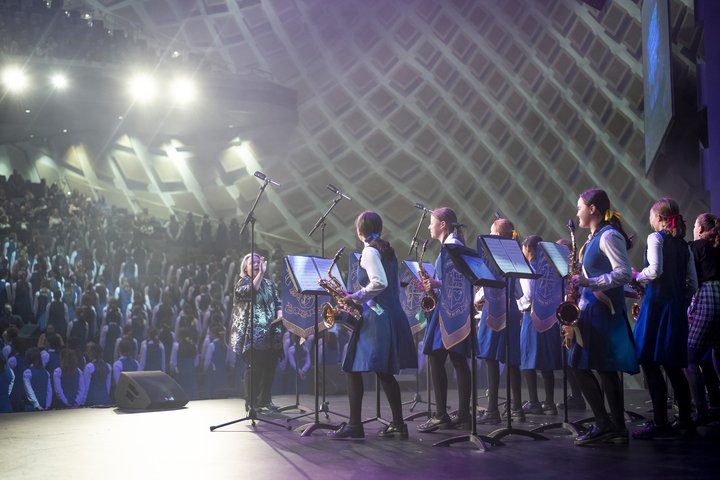 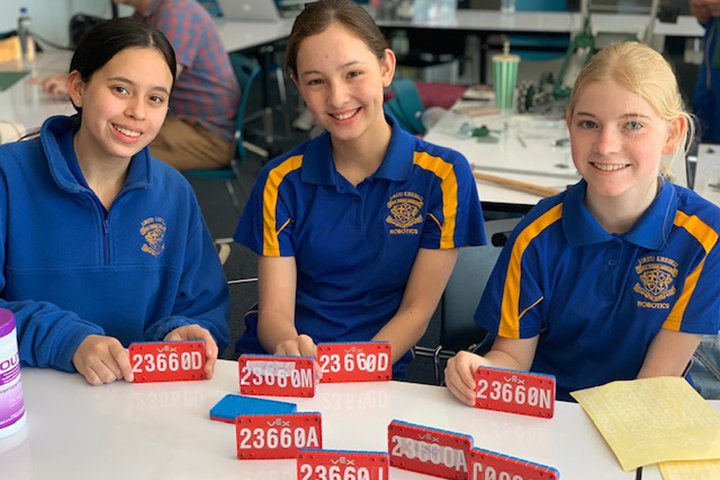 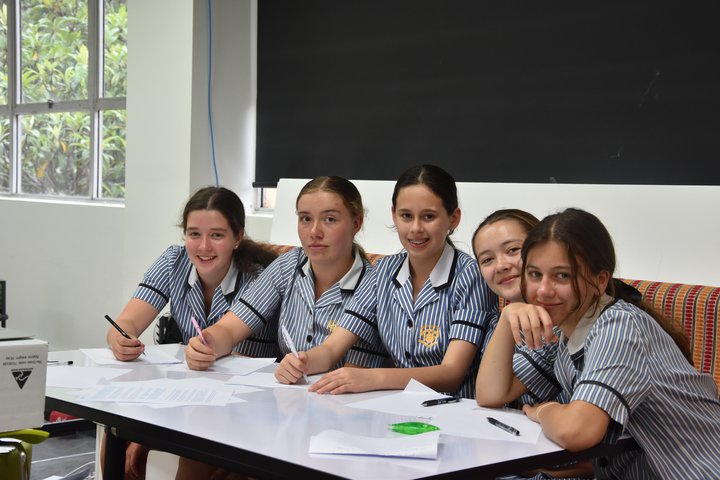